Some trademark battles take years. Some decades. The trademark dispute between “The King of Beers” 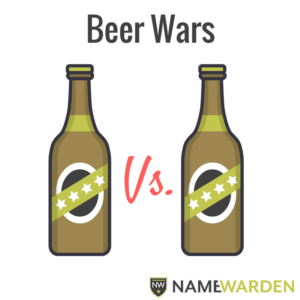 and the “Beer of Kings”? Almost a century. The Budweiser trademark dispute has been going on for 77 years.

Budweiser Budvar Brewery was founded in 1895 by citizens of Budweis in the Czech Republic and is state-owned.

Anheuser-Busch, a brewery Americans all know very well, got its start in St. Louis in 1852. The Budweiser we all know and have likely sipped, however, was not a thing until after the 1870s when Adolphus Busch toured Europe to explore European brewing methods. He took exceptional notice of a Pilsener style beer that had become popular in Budweis, a city in the Czech Republic. In 1876, Anheuser-Busch introduced the United States to Budweiser. Because of the company’s early ability to refrigerate and transport bottled beer (something for they are known), the beer became a national beer brand. They registered Budweiser as an invented trademark with the U.S. Patent Office in 1878.

And thus began the dispute. In honor of the most recent ruling, here’s a timeline that shows just how long these two breweries have been fighting.

The Budweiser trademark dispute through the years

Once Budweiser Budvar catches wind that a company in the U.S. has successfully registered Budweiser as a trademark, Budvar  argues that the Budweiser trademark should have never been allowed, because Budvar has been brewing their beer for 500 years.

During that hearing, Adolphus Busch states, “The Budweiser beer is brewed according to the Budweiser Bohemian process… The idea was simply to brew a beer similar in quality, color, flavor and taste to the beer then made at Budweis, or in Bohemia.” This statement is one that has been brought up by Budvar in the many subsequent battles.

1939: Both sides agree that Anheuser-Busch was the first to trademark the Budweiser name and Budvar concedes all territory north of Panama to the American brewer.

1989: Anheuser-Busch begins expanding internationally while Budvar decides to focus on exports. Talks begin on a trademark agreement to divide up the territory around the world.

1996: Anheuser-Busch registers the Budweiser name with the European Commission and Budvar challenges.

2004: The European Commission grants Budweiser Budvar N.C. with the right to use Protected Geographical Indications “Budějovické pivo” and “Českobudějovické pivo”.

2009: The European Court of First Instance upholds a ruling refusing AB InBev permission to register the Budweiser brand as its trademark. AB InBev keeps the Budweiser or Bud name in 23 of 27 European countries, including the U.K., where courts have ruled both companies can call their beer Budweiser. Budvar is granted exclusive control of the name in Germany.

2010-2011: Budvar wins 88 of 124 disputes and holds exclusive rights in 68 countries, mostly in Europe, preventing AB Inbev from selling its Budweiser brand in some key markets, including Germany.

2012: Budvar rejects an AB InBev proposal for a global settlement.

2013: The UK Supreme Court confirms that both breweries can use the mark simultaneously in the UK.

2014: Budvar loses a decision in Portugal to register its beer under the Budweiser name in the country after AB InBev purchases Budweiser trademarks in Europe from Budweiser Brewery Samson.

So there you have it. A trademark war that has been going on for 77 years!

Here at Name Warden, we work with trademarks, and we like beer.  Lately we have seen a lot of beer companies feuding over trademark rights.  For example, Magic Hat v Georgetown Brewing, Lagunitas v Sierra Nevada, Bell’s v Innovation Brewing, and on and on.